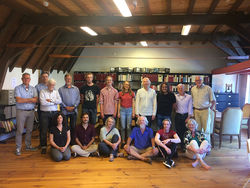 As part of the jubilee programme of the NKV, a masterclass “Composing for the Carillon” was organised in June 2018. The participants were invited to expand the existing repertoire for Carillon with an original composition on the occasion of the 100th anniversary of the NKV.
The masterclass was given in June 2018, by the well-known composer and teacher Peter-Jan Wagemans. The 14 participants had already attended a workshop in April 2018, with Frans Haagen and Gijsbert Kok in order to learn all possibilities of the Carillon, including the different combinations of Carillon and other instruments or electronics.

In the months after this workshop, the composer- participants had time to work on their composition. Each participant received support and help when needed from a skilled carillonneur during the proces of composing.
All compositions were handed in before the masterclass took place in June. This allowed the teacher, Peter-Jan Wagemans, to give a thorough analysis of the compositions. Besides the analysis and advise of the teacher, there were also discussions among the composers about their work on the day of the masterclass. Based on this new information, most composers delivered a second, improved version of their work, out of which Peter-Jan Wagemans chose the five best compositions. 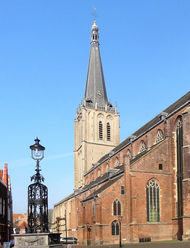 These compositions will be performed on the carillon of the Martinitower in Doesburg on the 4th of November.
The awarded works are composed by: Nikos Kokolakis, Yael Levy, Harm Roché van Tiddens, Joris van Suijdam and Eveline Vervliet.

The carillon concert on November 4th starts at 2pm and lasts about 45 minutes. After the concert, the Mayor of Doesburg will award the prizes to the composers of the winning works. This event will take place in the main hall of the nearby located Gasthuiskerk. 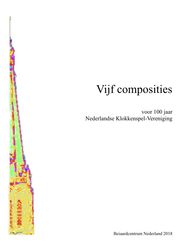 We will continue our meeting in the church’s foyer. The Netherlands Carillon Centre has succeeded in publishing the compositions in one volume, titled “Five Compositions for 100 years Nederlandse Klokkenspel-Vereniging”, within a short amount of time. A copy of the publication can be bought on the spot, or by ordering beforehand on subscription terms in the BCN webshop (also in PDF).

With the performance and the publication of the compositions, the project “Composing for the Carillon” comes to an end, and the jubilee programme 2018 of the KNVK is thus completed.