SPRINGFIELD - On 2nd and 3rd June, the Thomas Rees International Carillon Competition will take place for the first time in Springfield IL. (USA). A broad and varied program is requested from the candidates. The organisation of the competition is in the hands of the North American Carillon School (NACS). Based on sound recordings from the various entries, five candidates have been selected for the final in Springfield. Those from the Netherlands include Rien Donkersloot (former student of HKU Netherlands Carillon School) and Bob van der Linde (student of HKU Netherlands Carillon School). 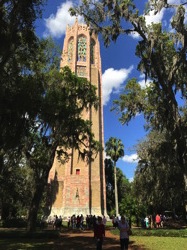 LAKE WALES - From 4 to 12 March, the International Carillon Festival took place in the Bok Tower Gardens in Lake Wales (Florida, USA) for the 23rd time. This is one of the most beautiful places in the world to enjoy carillon playing in peaceful and quiet surroundings. The construction of the 100 hectares of gardens and the construction of the tower with the beautiful Taylor carillon began in 1921 on the instructions of the Dutch emigrant Edward. W. Bok. He wanted to create "a place of beauty unmatched in the country", which has undoubtedly succeeded. During the festival, concerts were given by Geert D'hollander (regular carillonneur of the Bok tower), Frans Haagen, Koen Cosaert, Lisa Lonie (also with Janet Tebbel) and Ellen Dickinson. 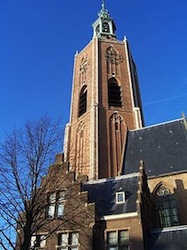 DEN HAAG / UTRECHT - On Wednesday 5 and Friday 7 April two presentation concerts took place as part of a special cooperation project between the composition class of the Royal Conservatoire in The Hague, The Hague city carillonneur Gijsbert Kok and the Utrecht city carillonneur Malgosia Fiebig.
Six students from different countries each wrote a new work. In this way young composers come into contact with the carillon and new carillon repertoire is created.

The concerts were given as part of the Spring Festival of the Royal Conservatoire and performed on the carillon of the Grote Kerk in The Hague and the Dom Tower in Utrecht. The compositions are expected to appear in print soon.

LEEUWARDEN – In 2018, Leeuwarden is the European Capital of Culture. Within this framework, many cultural activities are being organised in the Friesian capital and the surrounding area. The carillon in the dome of the City Hall of Leeuwarden is however no longer regularly played because of budget cuts since 2010.

In order to make this historic instrument sound again in 2018, the management board of the Sint Anthony Gasthuis is looking for a carillonneur. The assignment will be to play the 39 bells in mid-tone tuning. Thirty-one of these were cast by Claude Fremy in 1686. 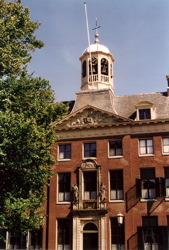 The tasks for the carillonneur in 2018 will be:

Candidates can apply by supplying relevant information in an email to the chairman of the board of St. Anthony Gasthuis, Mr. H. Bosch: This email address is being protected from spambots. You need JavaScript enabled to view it.. The application deadline is May 22, 2017. 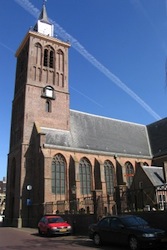 DE RIJP – On Saturday April 1, 2017, the first bell for the new carillon of De Rijp's Grote Kerk (Noord-Holland) was cast that took place in the open air near the church. To make this possible, the bell-founder Simon Laudy had built a furnace on the spot. One day later, this first and largest bell could be broken out of the mould. The bell is a gift from the municipality of Alkmaar and it bears the coat of arms of Alkmaar.

The Carillon Foundation De Rijp has been working for more than three years to prepare for this new carillon, which will include 47 bells. The cost of casting and installing the new instrument amounts to a total of € 215,000.-. This project also provides safer access to the tower and makes some adjustments to the swinging bells. In addition, the historic tower structure is being restored. To enable the financing, various funds and companies have been enrolled and support has been promised by the municipality. 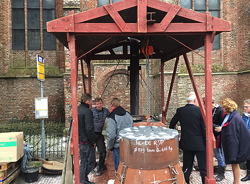 Prior to the casting, there were speeches by Chairman Fred Hoek and Secretary Fré Harmsen of the foundation. On behalf of the city, councillor Anjo van de Ven was present. She started the casting of the bell at 21:30, after which bell-founder Simon Laudy took over.

Particularly interesting was the speech by Alkmaar's city carillonneur Christiaan Winter, who explained the emergence of carillon culture in the Low Countries to the numerous public in the Grote Kerk. He will be the regular carillonneur of the instrument when it is commissioned in December 2017.

The tower of the Grote Kerk had previously housed a carillon. However, the bells were lost during a massive fire in 1654 that began in a hemp mill. Most of the village burned down and only the church from 1529 and the town hall from 1630 remained. When in 2014 the municipalities of Schermer, Graft-De Rijp and Alkmaar merged, Christiaan Winter suggested placing a new carillon in the Grote Kerk at De Rijp. 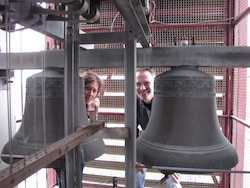 ALMERE – Bauke Reitsma has been appointed town carillonneur of Almere-Stad and Almere-Haven and will be playing on a weekly basis in good cooperation with his colleague Gerda Peters who also provides weekly concerts on both instruments. Bauke is already carillonneur of Bunschoten, Baarn and Weesp.

Fourteen candidates responded to an advertisement from the municipality of Almere. Only two were eventually invited for an audition on the carillon of the Goede Redetoren.

The Almere Carillon Foundation while not directly involved in the selection process greatly appreciated that the municipality had invited not only musicians but also representatives of shopkeepers to take part in the selection. Apparently even residents could give their opinion, without risk of course to the impartiality of the proceedings. In any case, the selection committee completed their task promptly on the same afternoon.

Bauke is also active as organist, pianist and conductor in addition to carillonneur. He is also secretary of the board of Netherlands Carillon Center. 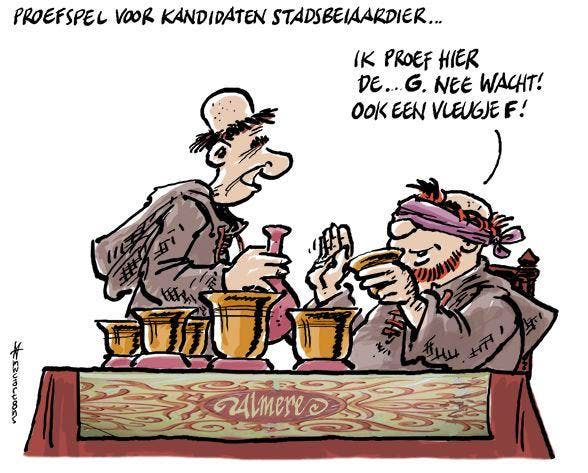 Cartoonist Maarten Wolterink, as seen in the newspaper 'Almere Today', clearly had other views about such an audition or proefspel - playing on the Dutch word for test: proef which is also used for ‘tasting’.… 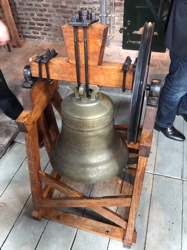 ZUTPHEN – The Clockhuys museum was opened in the Wijnhuistoren on Thursday February 23, 2017 with the carillon of this characteristic tower at its heart. It is absolutely in keeping that campanology is the main theme in the Wijnhuistoren. The brothers François and Pieter Hemony poured the bells of their first carillon for this tower in 1664. Unfortunately, this instrument was largely lost in 1920 due to a fire in the tower. Of the 32 Hemony bells seven survived the disaster. Only one of them is still part of the current carillon. 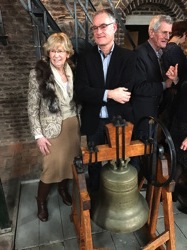 During the opening of the museum, Ada Boerma-Van Doorne, chairman of the Dutch Carillonneurs Association (NKV) addressed the attendees. On behalf of the NKV she presented the so-called Van der Elst bell to the museum. This bell, being the perpetual trophy for the improvisation competition organised by the NKV, was cast in 1963 and is named after Dr. Wijnandus van der Elst, chairman of the NKV from 1949 to 1955. It is not only figuratively but also literally a prodigious prize and therefore not easy to move. That is why the winners these days receive a scale replica, including a matching wooden bell frame.

The new exhibition space covers two floors in the tower. Visitors can play on a practise carillon keyboard and watch a special seven-minute movie about the carillon. 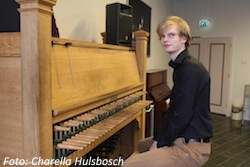 AMERSFOORT - On Tuesday, June 27th, Bob van der Linde, a student at HKU Netherlands Carillon School, will play an exam concert on the Eijsbouts carillon of the Amersfoort Onze-Lieve-Vrouwetoren. His performance will be judged by carillon teachers and a delegation of the HKU Utrechts Conservatorium. The time of the exam and the program will be posted on our website, on Twitter and on Facebook.

The collections and all individual works from the editions of the Netherlands Carillon Centre are now available in PDF. Order in the same way as usual. Once your purchase has been confirmed you will receive a link with which you can download the work in a PDF file.

For clarity, this is only for works published by ourselves. They can be found in SheetMusic in PDF, but also in a related page in the edition from which they come. The editions remain available as paper versions.

For our Belgian customers

Online payment via KBC / CBC is also possible via the webshop of the Netherlands Carillon Centre.

This work was commissioned by the municipality of Kampen on the occasion of the 15th anniversary of the Carillon Circle Kampen..
Order the paper version
Order the PDF-version

Includes: Alla Turca, a number of church sonatas and parts of three piano concertos. All arrangements are by Gideon Bodden.
Order the paper version
Available as a PDF-file from April 12th

Also new in the webshop:

Curious about Mécanique Céleste? This work will be performed by Janno den Engelsman at the Lange Jan in Middelburg on July 25 at 19:00. 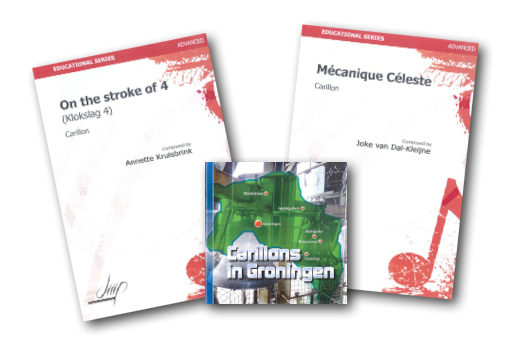 And again in stock:

The annual Mechelen VBV-day will take place on Easter Monday, April 17, 2017. This will be a cordial gathering of carilloneurs, carilloneur students and enthusiasts. The Flemish Carillon Society warmly invites everyone! See here the whole programm (in Dutch).

Registration before April 11, 2017, via e-mail to This email address is being protected from spambots. You need JavaScript enabled to view it.. To state:
- persons whose pay x meal (no VBV Member)
- vegetarian dish?
- also free recital at OLV-on-the-Dyle?