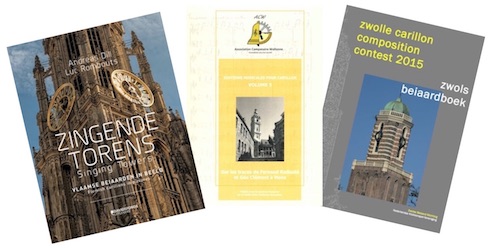 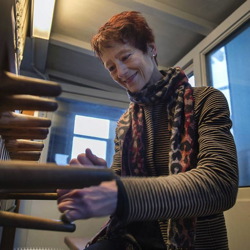 ARNHEM – On April 20, 2017, Joke Brandsma died She had been city carillonneur of Enschede since 1991 and Arnhem since 2016. In addition to carilloneur she was also conductor of the Velps Kleinkoor choir and the choirs of the Diaconessen church in Arnhem and the Dorpskerk in Rozendaal. The mourning card mentioned what was important to her: "Music is my life; my life is music “.

Joke was born in Heerenveen in 1959 and started her music education with the organ classes of Anco Ezinga. After that she studied organ at the Music Conservatorium in Arnhem. There she also learned the carillon through the lessons of Gert Oldenbeuving. Later she studied at the Dutch Carillon School in Amersfoort with Arie Abbenes and Bernard Winsemius. For choir direction and choir music she traveled to Utrecht.

As a composer she worked on the Organ Book for the “491 Gezangen” collection of church music, the Zingend Geloven (Singing Beliefs), and the nieuwe Liedboek (new Songbook.) She wrote, among other things, "Miserere mihi" (1979) and "Lutum fecit" (1985), two motets on gregorian themes for 5-part a cappella choir. In 2011 followed "Lorc'amor" and Mystiek Lichaam (Mystical Body), also for a capella choir. She wrote both music and text for Van de dolfijn en de forel (From the dolphin and trout) for choir and Kalm is de nacht (Calm is the night) for choir and whistle.

On behalf of the NOS, she reworked arrangements by Johannes and Frederik Berghuis. These Delft carillonneurs arranged a lot of carillon music in their time, including overtures, folk songs, dances, and marches. This so-called Berghuis repertoire is located in the Delft municipal archive.

For carillon, Joke wrote the "Twente Suite" in 1995, in which she blended characteristics of the five Twente carillon towns, very inventive and entrancing. Her former composition for carillon "The Rhythm of Mother Earth" (1988) originated from the song Zo lang er mensen zijn op aarde by Tera de Marez Oyens. Joke devoted her work to her partner Joke Nachenius. 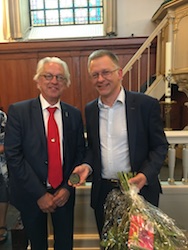 UTRECHT – On Friday June 2, the Utrecht Bell Ringers Guild awarded the Jacob van Eyck Oeuvre Prize 2017 to Dr. Luc Rombouts, carilloneur of the city of Tienen and the University of Leuven, and board member of Museum Klok & Peel in Asten.

The prize is named after the blind musician and composer Jacob van Eyck (1590-1657). In 1625 Van Eyck was appointed carillonneur of the Dom and he later played other carillons. It was Van Eyck who identified the overtones of a bell and how they could be influenced by the profile of the bell.

The Jacob van Eyck Prize is awarded every three years. In 2017, no less than eleven candidates were nominated. In 2014 there were six and in 2011 seven.

The jury proposed not only to award the regular Jacob van Eyck award this year, but also a Jacob van Eyck Oeuvre Prize. The Utrecht Bell Ringers Guild agreed with this proposal. Both prizes consist of a reward and a sum of € 2,000.

The classic Jacob van Eyck Prize has been awarded to the initiators and executives of the highly successful restoration project of the 17th century Van Call clock at the Utrecht Jacobi church in Utrecht.

MECHELEN - On Saturday April 29, 2017, the Royal Carillon School ‘Jef Denyn' organised the annual carillon day in collaboration with the Koninklijke Vereniging voor Toren & Beiaard. In the morning everyone was welcome to take a look at the school in the stately building at Bruul. Malgosia Fiebig, city carillonneur of Utrecht and Nijmegen, gave a Masterclass. In the afternoon, students attended a concert at the St. Rombouts tower. Then there was another concert in the Culture Center with the new chamber carillon, a handball choir and instrumental ensembles.

According to the "Gazet of Antwerp", the carillon day attracted a lot of people to the school. The visitors were received by director Koen Cosaert and received a brief tour. Those that wished could try their hand on the study keyboard. The carillon school has paid a lot of attention to youth education and has developed a program with its own method for children. A new keyboard has been made with slightly smaller dimensions to make it easier for children to play. The youth find it awesome to make sounds that carry right over the city.

The carillon school has 62 students in the current school year, of which ten are younger than 15 years. Of course, that provides much satisfaction in Mechelen. And the councillors for culture put it like this: "Our Royal Carillon School ‘Jef Denyn' makes sure that carillon culture is one of the banners of the city of Mechelen"! 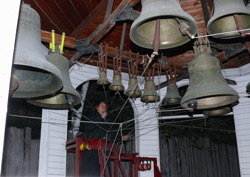 In October 2016 the music conservatory of Novosibirsk invited me to lecture about the carillon. Host was campanologist and composer Sergey Tossin, who is a professor at the conservatory. He has written several books about Russian bells and composed two pieces of carillon music based on Russian bellringing. The purpose of the lecture was to explain to the conservatory composition students the carillon as an instrument, how it works, its role as part of the European city soundscape and the American view of it as a concert instrument.

Alexey Talashkin gave a tour of the small bell museum next to the Church of the Archangel Michael. He also played a chime on the 16-bell zvon next to the church and showed the bellringing school with prints and drawings, a small library and a little practice zvon with substitute bells.

It was bellringer Andrey Beresovsky who showed us the zvons of the Ascension Cathedral and the Church of the Assumption of the Blessed Virgin. During a visit to the Cathedral of Alexander Nevsky the zvon was played by Dmitry Indinok. It was a very interesting visit with many wonderful memories.

Foto: Alexey Talashkin playing the zvon of the Church of the Archangel Michael 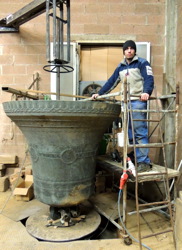 I visited the Allanconi bell foundry east of Milan at the end of January 2017. The young director Emanuele uses traditional methods for casting. Allanconi is setting up a small museum designed to show visitors the history of bellfounding in Crema and to explain how bells are cast there.The foundry can melt up to 30 tons of bronze using three furnaces simultaneously. Because Allanconi uses the natural materials of bell bronze: clay, animal fat, water, beeswax, hemp, horsehair, milk, wood and ashes and light profiles – a C1-bell weighs 1,650 kgs - his bells cost half as much as those of other European foundries. 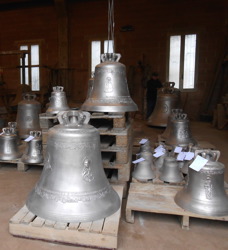 He casts up to 90% of Italian bells and in 2016 cast 281 bells weighing a total of about 32 metric tons. He has begun casting major third bells and the one I saw had the typical resonance and pleasant sound of a well-tuned minor third-octave bell. Allanconi is perfecting his ability to tune his bells precisely and is going to build a four-octave travelling carillon this year in order to show his new product to potential buyers. 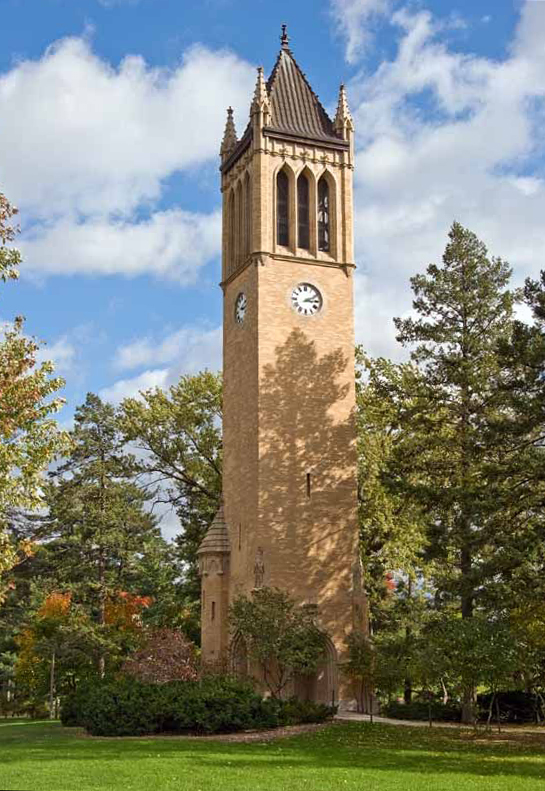 AMES - Iowa State University Department of Music & Theatre is proud to announce the Carillon Composition Competition 2017. The purpose of the competition is to encourage the writing of original carillon compositions by young composers under the age of 35. The prizewinner will be awarded USD 500 in cash and the winning composition will be performed at the ISU C-HOP Festival 2017.

The submitted work shall be an original composition for dance, and for four-octave carillon (tenor C to C4), with two-octave pedal board. The composition may be a solo, a duet for one carillon or a work for carillon with one or more other instruments. The composition shall be 4 to 7 minutes in length. Submitted composition must be postmarked no later than August 15, 2017. A transcription or arrangement will not be accepted.

The judges are Luc Rombouts, Jeffrey Prater, and Tin-Shi Tam. They reserve the right not to award a prize if the submitted compositions are not of a satisfactory level. Note that the decision of the judges is final.

For more information about how to submit a composition, visit the web: http://www.music.iastate.edu/carillon OR contact the University Carillonneur at Iowa State University, Department of Music & Theatre, 149 Music Hall, 2427 Union Drive, Ames, IA 50011; Phone: (515) 294-2911; E-mail: This email address is being protected from spambots. You need JavaScript enabled to view it.

MECHELEN (B) - Piet Hamelink (The Netherlands) and Jakob De Vreese (Belgium) are candidates for the final exam at the Royal Carillon school 'Jef Denijn' in Mechelen this year. The exam consists of the presentation of their final work (14 June, 18:00) and a performance on the carillon of the Saint Rombout tower (17 June, 14:00).

The subject of the final work of Piet Hamelink is "Singing bronze in Zeeuws-Vlaanderen". Jacob de Vreese has been engrossed in "Salvator, an online database for carilloneurs”.
Piet Hamelink (born 1946) grew up in Zeeuws-Vlaanderen and worked for many years elsewhere in the Netherlands as a municipal official. Throughout this time he was active musically as organist and conductor. Only a few years ago he received his first carillon lessons from Koen Van Assche. Since 2014 he is town carilloneur at Axel and Sluis.

Jakob De Vreese (born 1988) played the piano from a young age and later took up the organ and carillon. In 2013 he won the International Competition for Carilloneurs in Saint-Amand-Les-Eaux. A year later he was laureate at the 2014 Fabiola contest, and he then achieved a 2nd prize in Goes in 2015. He has now become town carilloneur of Geraardsbergen and relief carilloneur of Ghent. Together with Rachel Perfecto he forms the 'Sonata Duo', a duo that readily takes up any musical challenge 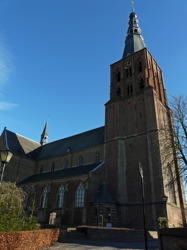 BOXTEL – The restored carillon of St. Peter's Basilica in Boxtel will be re-commissioned on 10 June 2017 at 20.00. Nearly five years ago the tower was hit by lightning. In addition, the clock was damaged and melted the electronics of the automatic system.

During the restoration, the name "Jan Jaspers" was painted on the smallest 9 kg bell. His daughter Yvon Jaspers, presenter of various television shows, personally brought the bell up and mounted it in the bell chamber. The family Jaspers has lived for a long time close to the Boxtel tower. Yvon had grown up near the basilica. Unfortunately, Jan Jaspers died in early 2016. He was himself an enthusiastic guide and an expert in the history of the monumental church. 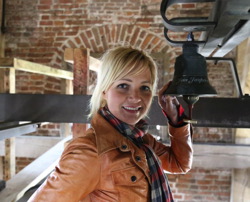 The restoration work was carried out by Toine Daelmans from Helmond with Arie Abbenes as advisor. In order to save costs, a dozen volunteers have often lent a hand in the work. In addition, students from the Baanderheren College, the school where Jan Jaspers was an English teacher, helped with all kinds of jobs. In this way, a large number of Boxtel residents became involved in the restoration of the carillon. The required financing, almost 100,000 euros, has been raised by collective actions and donations from funds and institutions.

The inauguration concert “Toeters en Bellen” (“Brass and Bells”) will be held on June 10th and the Boxtelse Gildenbonds Harmonie will take part. Together with guest carillonneur Rosemarie Seuntiëns, they will play, among others, "Overture 1812" by Tchaikovsky and "Conga del fuego" by Arturo Marquez. In addition, the 48 bells will also be played by Tommy van Doorn and Arie Abbenes. The carilloneurs will be visible to the public on a big screen. 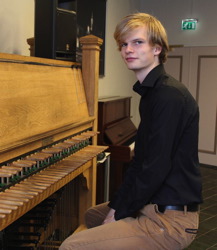 AMERSFOORT - On Tuesday, June 27th at 13:30, Bob van der Linde, a student at HKU Netherlands Carillon School, will play an exam concert on the Eijsbouts carillon of the Amersfoort Onze-Lieve-Vrouwetoren. His performance will be judged by carillon teachers and a delegation of the HKU Utrechts Conservatorium.

Bob van der Linde (born 1995) started organ lessons at the age of 13 in Zwolle with Roy Kroezen. He is currently studying at the Conservatory in Utrecht, organ and church music with Reitze Smits and Mark Lippe. In 2015 he won the first prize in the category of undergraduate during the International Carillon Competition at Goes. At a competition in Breda, he won the second prize. Bob has been organist of the Anglican Church in Zwolle since 2010. In January 2015 he was appointed organist of the Marcus church in Utrecht. He is also conductor of the mixed choir in the R.K church in Maarssen.