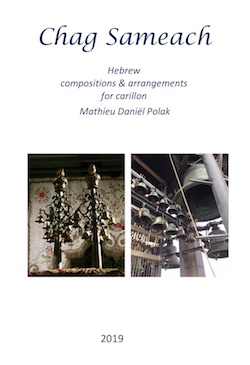 In the beautifully edited bundle ‘Chag Sameach’, which recently came out and was composed by carillonneur Mathieu Polak, there are new compositions and arrangements for carillon of traditional melodies sang on Jewish holidays in the temple or at home.
Chag Sameach literally means: have a happy, joyful holiday. During Jewish holidays people greet each other, at home and at the synagogue, with these words.
Jewish services know a centuries-old, rich vocal tradition. Besides the recitation of prayers, it is the solemnly or exuberant singing of prayers, the structural connecting element, which gives a characteristic musical contribution to the services.
In this way, each Jewish holiday has its own, specific, recognizable melody, which gives the listener, accustomed to this use of music, an immediate association to that holiday and everything that is associated with it.
There are traditional melodies for all Jewish holidays in the book Chag Sameach, also, there are special new compositions by Mathieu. The introduction gives a clear description of the Jewish holidays, of the accompanying melodies that Mathieu selected and, when known, the composers or sources of the music.
The arrangements of traditional melodies are easily recognizable for listeners under the tower and are inspiring to play for a carillonneur. In a multicultural society, it is appropriate to play, regularly, diverse music on the tower: music that sounds familiar to many people.
Because this book contains melodies of all Jewish holidays, it can be used very well for programmed carillon concerts themed around Jewish music, but it can also be played at the regular market or late-opening concerts. In the same way it is now customary to play Saint Nicolas melodies in the last two weeks of November for the benefit of young listeners, the carillonneur can connect to the sense of community by playing well-known melodies around the time of Jewish holidays. Most office calendars contain the dates of Jewish holidays too.
This new bundle ‘Chag Sameach’ by Mathieu Polak offers a practical, valuable and musical enrichment to the existing repertoire of Jewish melodies for carillon.

Moshé Lewkowitz, city carillonneur of Nieuwegein and Chazan (precentor) of the Liberal Jewish Congregation in Utrecht.