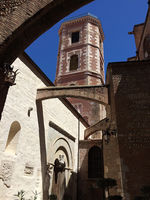 Between the 10th of April and the 20th the 31st edition of the ‘Festival de Musique Sacrée’ took place in Perpignan, France. For this festival, an international composition contest for carillon was organized. The winning composition would be premiered during the festival on the Bollée carillon (1878) in the tower of the ‘Cathédrale St. Jean Baptiste’.

The composition needed to meet several contest rules. It had to fit the theme ‘Nocturne’ of the sacred festival and it had be ‘maestoso’, yet dynamic and brilliant in character. The piece needed to be quatre mains and have a duration of approximately two minutes. Also, the characteristics of the historical instrument needed to be taken in account, as it lacks the c#, d#, and g# in the lower register (pedals).

The title was awarded to ‘Procession Nocturna Miserere Mei Deus’ by Luc le Provost, from France. It was played as the first piece of the concert by the city’s two carillonneurs, Élizabeth Vitu and Laurent Pie, on the 13th of April. This concert was part of a series held in the twilight for a large audience. Honourable mention was given to Naoko Tsujita for her composition ‘Nocturne Dance’.