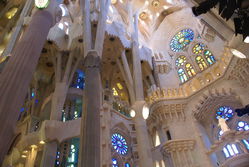 In the first week of July, the nineteenth congress of the World Carillon Federation took place in Barcelona. The city itself has one instrument situated on top of the Palau de Generalitat, the seat of the Catalan government. The clocks hang in an open structure inspired by the crown of one of the towers of the adjacent cathedral. The listening venue inside the palace is really very delightful.

The traveling carillons from Douai (F) and Constancia ℗ were also present at the congress as well as the 'bronze piano' of Anna Maria Reverté and Koen Van Assche. This extraordinary instrument was in use at various concerts along with an orchestra including a performance in the Barcelona Auditorium. During this concert there were three premieres of new works for carillon and orchestra written by Catalan composers. 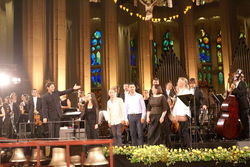 But the most impressive was undoubtedly the concert in the magnificent Sagrada Familia, Antonio Gaudí's still unfinished masterpiece. About 900 invited guests witnessed this special event. Most notably, it is rarely that concerts are given in this majestic church due the need to close the church early for tourists. Congress attendees were given an exclusive tour. The stage for the orchestra was built and the 'bronze piano' positioned during the night. 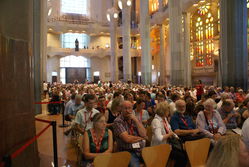 The conference was very well organised with a full and varied program. At various places in the city the public could encounter the traveling carillons. The closing concert on the square in front of the cathedral drew a huge crowd. They enjoyed a performance of the Cobla Sant Jordi, a local wind ensemble including Catalan shawms (double-reed instruments) and string bass, and also Sardana dancers and dancing giants. A typical Catalan tradition was the erection of a human tower, a Castell. Very exciting to see.

Over 80 delegates had also registered for the post-conference. They went by bus to Tarragona, Cevera, Lleida and Montserrat to attend concerts. The quintessence was the mighty, full sound of Montserrat's highest monastery.