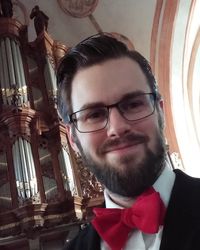 From 2018 onwards Leeuwarden revives the position of city carilloneur. The Sint Anthony Gasthuis raised funds to have the carillon of the town hall played every week of the year in which Leeuwarden is European Cultural Capital. The carillon was played weekly until 2010. At that year, unfortunately, Leeuwarden ended the position in order to cut down expenses.

On 29 September a competition was held to select a candidate. A jury consisting of Arie Abbenes (former carilloneur of Utrecht and Eindhoven) and Frans Haagen (professor of carillon at the Dutch Carillon School in Amersfoort) listened to four candidates, all of them anonymously playing a half hour recital.

The position was awarded to Vincent Hensen from Groningen, master student of the HKU Dutch Carillon School. He will play on Fridays and special holidays.