Hemony carillon, automatic chiming system and the bells of Middelstum 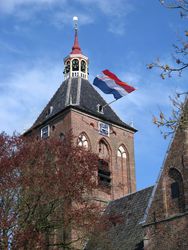 A book has been published to commemorate the restoration of the clockwork mechanism and the drum of the automatic chiming system in the tower of the Hippolytus church in Middelstum. This 32-page booklet, with beautiful color photographs, was produced by the Oude Groninger Church Foundation. It is part two in the series 'Clocks and Clocks' and was written by Henk Veldman, the town carilloneur of Middelstum.

Church and tower have been owned by the foundation of Oude Groninger Churches since 2014. The clock dates back to 1561. In the tower there is also a 1156 kg bell, cast in 1520 by Johan Schonenborch for the church in Garnwerd. This bell came to Middelstum in 1888.

Veldman describes how the small village of Middelstum installed a carillon in 1662 consisting of 23 bells by François Hemony. It is definitely unique that the Hemony bells have never been retuned. It was only in 1857 that an automatic chiming drum was installed in the tower by the famous Groninger organ builder Petrus van Oeckelen. At the same time, however, the keyboard was removed so that only the drum could sound the bells. Almost a century later, in 1949, the carillon was expanded by seven bells and again a keyboard was installed. From that moment the drum fell silent, a silence that lasted until April 15, 2016.

The drum performance had always been very irregular because of the excessive distance of twenty meters between the drum and the bells. At the suggestion of carilloneur Simon Laudy, new hammers have been mounted at the bells. A hammer is now raised by a magnet, and on release the hammer descends by its own weight and strikes the bell (in the picture are hammers still without magnets). A computer sends commands to the magnets, but the drum can also control the magnets. The vertical wires pulled by the levers of the drum operate electrical switches eight meters higher in the tower which then allow the current to flow through the magnets.

There are currently two chimes on the drum that are only available on special occasions for the time being. Meanwhile computer generated melodies sound over the village daily.

More information about the bells can be found on the website: www.carillonmiddelstum.nl 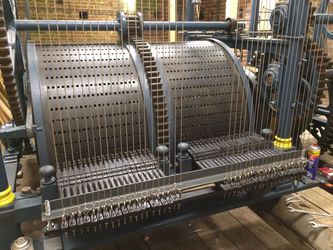 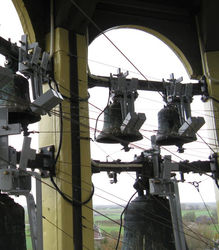 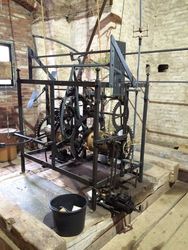