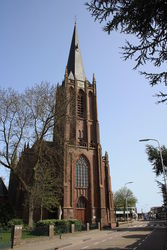 The carillon in the tower of the Basilica of the Holy Cross in Raalte was no longer played because of municipal spending restrictions at beginning of this year. Carilloneur Henk Veldman has recently been able to let the residents hear again, on Wednesday mornings during the weekly market, what a beautiful instrument the village possesses.

The recently established foundation 'Vrienden van de Baardaard Raalte' has agreed with the municipality that the foundation will in any case pay the carilloneur for the next three years, while the municipality is responsible for maintenance, insurance and electricity consumption. The carillon, including the computer that plays one of the forty pre-programmed chimes every quarter of an hour, is owned by the municipality of Raalte.

Henk Veldman, who succeeded Leon van der Eijk in 2009, is enthusiastic about the robust sounding instrument of 37 bells. The bourdon weighs 1700 kg and existing bells are included in the instrument. In 1974, Raalte's residents brought together half of the amount needed to purchase the carillon. The municipality funded the other half.

There is currently another campaign to restore the weekly Friday recitals. A locally known song is the Stöppelhaene, the Salland festival to celebrate the harvesting of the rye. The foundation has instructed the carilloneur to start each recital with the Stöppelhaene song, in support of this action. Henk Veldman hopes to revive the carillon excursions for primary schools in the future.